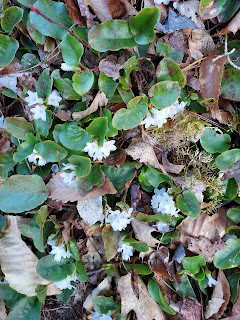 Happy first day of May. These are true may flowers and they smell so lovely. 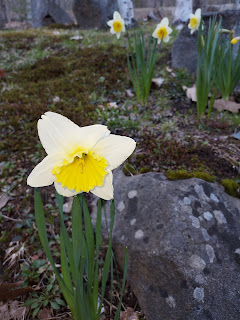 We had wind and we had rain, we had snow and hard frosts and still they showed up! So happy they did. 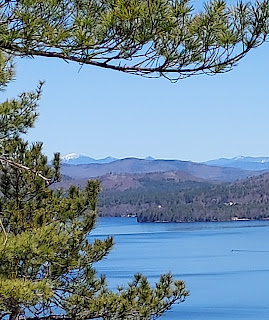 Today my friend and I headed out for a hike the weather could not have been better. We got up high enough to get a nice view of the lake and look at the snow on the mountains. 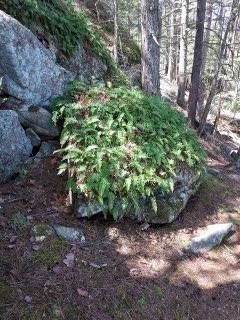 This is not a good picture but look at these ferns growing on a rock and the down the side of rocks so pretty. 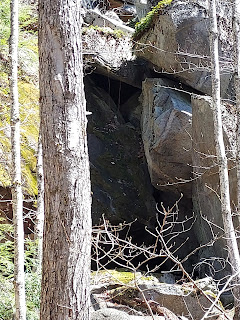 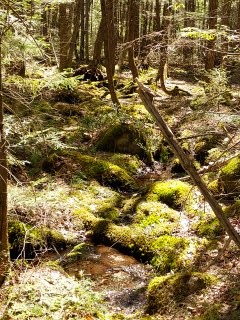 Again, not the greatest picture but this was like a little fairy forest. so magical looking everything was covered in deep green moss. 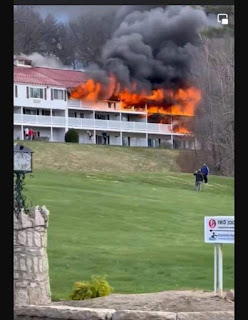 A very well-known hotel that had an indoor water park burned yesterday. It was the end of NH school vacation, so it was busy, and the really great news is that everyone got out!!! So sad, the last time we were there was to attend a wedding. 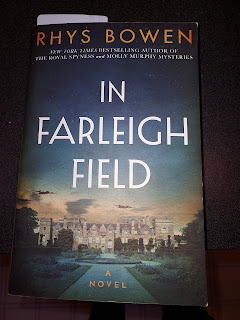 I did finish my book. It was about spies during WWII.
A lot of the wealthy people (certainly not all) felt it would be ok to let Hitler in so he wouldn't destroy any more monuments and homes in England. They felt life would go on the same as usual if he took over. They formed a group called the link.
Well as you know Churchill was having none of it.
So, it was based on those wealthy people and what they did to help Hitler's cause. Crazy when you think of it. You had no idea who trust. She did write about a fashion designer who helped the Germans she called her Gigi Armande but it was based on Coco Chanel.
I liked this author and will read more of her books. I am on the look out for the Victory Garden.
****
Have a great week.
Posted by acorn hollow at 7:10 PM

Happy May to you as well. My daffodils arrived in April and have since past.
Hitler, communism, politics, oh what tangled weaves they make as they DO practice to deceive.

Lots of beautiful nature pictures. I'd be a little weary about going into any of those caves for fear of encountering some wild creatures in there. lol... I'm not very brave.

That is sad about the beautiful hotel going up in flame. It's a blessing that no one was hurt and everyone got out safely.
Enjoy the beautiful weather.
It's supposed to be sunny and nice tomorrow. I'm starving for sunshine.
Hugs,
Julia

That hike looks like a nice one, beautiful views. Is that at the Squam center?
Aad about the hotel and must have been scary for the guests. I have wanted to stay up there but no dogs in the hotels.
Hopefully we can get up this year for a few visits.

Hello. I love the pictures of your hike. Looks like you had beautiful weather for a very nice hike. That books sounds like a good one. I am glad everyone got out of the hotel that burned, but it is sad that the fire broke out. Happy May Day to you too! Have a good week!

What beautiful places you have to hike...and what beautiful sights you see!! Those forest photos just draw me in... Growing up, I lived among the trees and moss I swear... We didn't have any fun caves though LOL. My favorite is the fern covered rock. I was happy when lichen started growing on some of the large rocks I have scattered in the yard. And, I have always loved ferns...probably because they remind me of the forest and woods. Tragic about the fire. I hope they will rebuild? It looks beautiful. That books sounds like I need to read it. I've read a great deal about that time period but never heard of this spy cluster. Scary stuff that. Enjoy your spring awakening....I'm still waiting. ~Robin~

Prims By The Water said...

So sad about the hotel. Glad everyone got out safe. Beautiful views of your hike! Janice

I agree about the woods. Too bad about the fire. Glad no one was hurt.

I don't know if my previous comment went through. I said...ahahah...I agree about the woods, I love taking spring walks before the bugs come out. Also, sad about the hotel, but glad no one was hurt. Have a good week.

You have the most amazing places to hike!!!
So very sad about the hotel but the fact no one was injured is a blessing.

Glad the daffodils held on despite the change in weather. They are hardier blooms then suspected. We were never at the Red Jacket Inn, but have passed it on our travels. It was good there were no injuries, but what a devastating loss when things are slowly re-opening.

I'm so glad you have signs of Spring in your beautiful neck of the woods! What a great place to hike and it's good to have a hiking buddy! A friend at work asked me if I was a hooker. I told her no but I do know a few from my blog buddies. Her Mother-in-law has moved to assisted living and they found tons of wool and bags of strips...worms? I thought of you! Have a good rest of the week!