Something To Caw About 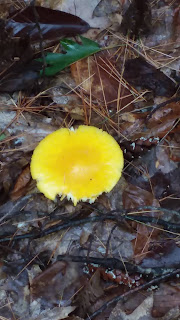 We have been so wet that the mushrooms/toadstools are everywhere.
These pictures are just from my walk. 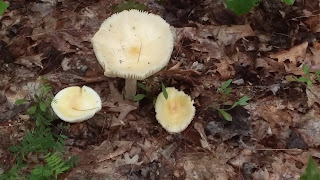 I have no idea what is poison and what is not. 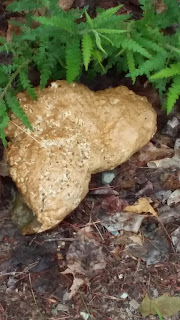 So I will leave that to the experts. 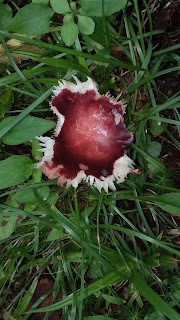 But some of them are sure pretty. 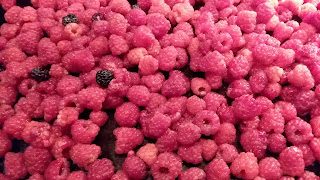 My neighbor called and wanted to know if I wanted to pick some raspberries. That would be yes I would! 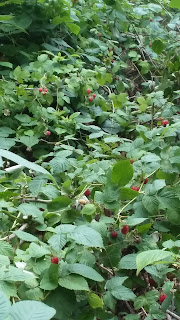 The big draw back was it was on a steep hill but we managed to get, I think about 5 1/2 to 6 quarts. The rain has molded so many right on the stems so sad but nothing you could do about it.
She said she had all she wanted so we could pick until our hearts content. I swear I ate a pint while I was picking they were so sweet and soft. I put them on a cookie sheet to freeze individually so they are easier to measure when we want them.( I will transfer them to qt bags after they freeze) 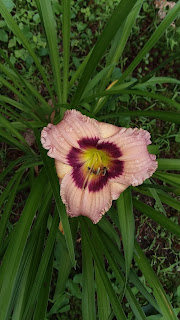 while my tomatoes are still green the flowers look ok.
Daylilies. 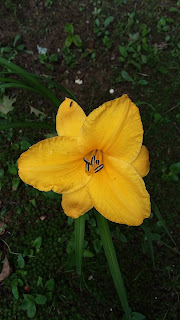 are tough they keep going in all weather. 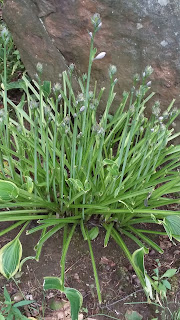 And yes my sticks, formally a beautiful hosta. (Deer grrr) But as you can see it is getting ready to bloom anyway! Love that! 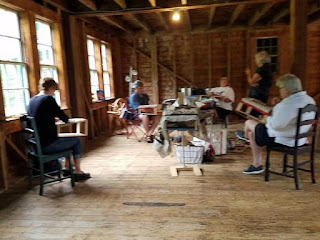 I taught 4 new hookers last weekend and everyone of then thinks they will continue. I do know that at least 2 of them will for sure. It was fun but the light was horrid. 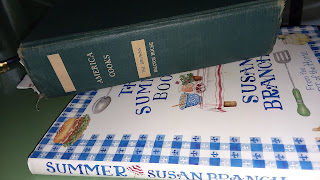 I have been going through cookbooks to decide if I really need 2 cupboards full of them. 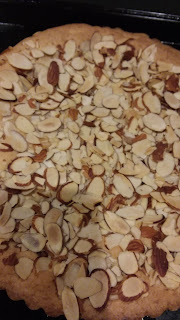 And I did get to bake my famous almond tea cake. I have never had anyone not like it. It is my BFF's favorite. 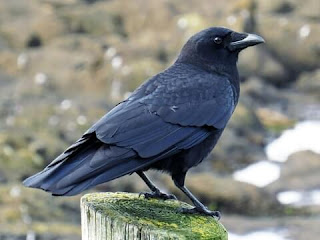 Last Friday I was walking to the end of our road (dead end) and all of a sudden I think about 5 crows swooped and and were yelling with all their voice. 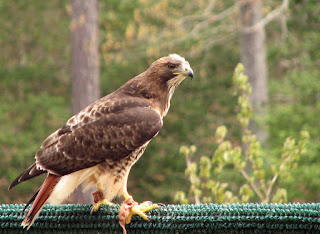 Then I see this hawk come out of the trees after one of the crows. Well the others were not having it and they harassed  him until he gave up. I then see him in the tree all the crows are in the trees all around him just making all the noise they could to warn the other birds he was there. He finally gave up and few away. They became so quiet. Those crows are something and so interesting to watch and hear. 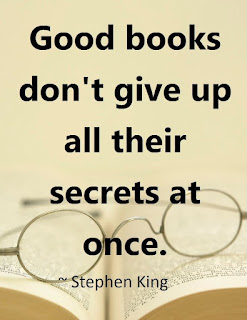 I am reading another Louise Penny and really enjoying it.
****
Today for once it didn't rain but it was so hazy from the forest fires out west. It makes my heart ache to think about it. I will try not to complain about the rain I know they need it so badly.
Have a wonderful week everyone.
Posted by acorn hollow at 8:36 PM

Those fresh raspberries look so good. I have some Louise Penny books on my to read shelf. It's good to know she is a good author. Hope your week is going well. It looks like it is. See you again soon.

I love both the crows and the hawks, so maybe things worked out about right for all involved. Rain really is a blessing. Yay for your almond tea cake; bet that made for some happy people.

Yes, those crows are something, aren't they?? ;-) They are smarter than almost everyone thinks. I think you need to share that almond tea cake recipe with us. What is it about berries right off the bushes/plants??? Nothing can compare. 5-6 quarts is a LOT of raspberries...lucky you! It was incredibly hazy here today as well, but I think it was because of the humidity. (Over the 4th at the lake, it was a different hazy and definitely a result of the fires). It has threatened rain the past several days but then the clouds part and the sun bears down. I'm tired of watering and it's still just July. Dumb idea to plan all those plants. ~Robin~

Lucky you to have all those luscious berries to pick from your neighbour's bushes. 6 quarts is a lot of berries but they will be so good this winter when the snow flies.

I've watched the crows taunt the eagles that live in our Lane and in turn, the blackbirds are taunting the crows. They are especially protective in the spring when they have newly hatched babies. The barn swallows are just as protective and swoop over us sometimes.

The almond cake looks yummy. I hope that the rain slows down enough for the sun to come out.
Hugs,
Julia

We have also had that haze from the wild fires all the way to Delaware. While I like the favor of raspberries and blackberries, I do not like the seeds so don't normally eat them. Blueberries and strawberries are a different thing and love them.

Crows are smart indeed. There is a family of hawks in our neighborhood and will often notice I've scared it off when walking outside. It is usually hiding in the tree waiting for the unsuspecting squirrel or God forbid a bunny. Wish it would choose the squirrels and not my adorable bunnies.

Those raspberries. YUMMO!!! I haven't had raspberries off the vine since my parents had the farm. So good.
How cool that you may have made some new hookers. Good light is so important!!!
Rain. We have not gotten the gully washers like the southern part of my county, but all rain is appreciated. It is nice to still be green and not brown and crunchy.

Raspberries are my favorite fruit in addition to blueberries and peaces, especially these days. I have never gone to any pick-your-own places, but years ago did harvest cranberries in bogs near where we lived in NJ.

I’m a big Louise Penny fan- I’m nearly caught up but lucky me there’s a new one out in August. I see your Susan Branch cookbook; you just keep that one ! I get so much inspiration just turning the pages. Hooray! You’ve hooked some new hookers! Way to go!!!

I love crows so much. We have a cousin of the crow out here, a kingbird. They will mob a hawk or owl. I didn't realize raspberries would mold on the stem! We used to pick wild ones and make cordial from them. Such wonderful flavor but they are the softest berry ever, have to pick them so carefully!

Prims By The Water said...

Nice stash of raspberries. We have had so much rain I think I may turn into a duck to enjoy it. LOL Your almond cake looks yummy too! Janice

I'd be making so much jam with those berries! Enjoy! We had a lovely no rain week but a storm blew through last night. I did the cookbook purging too. Most people don't want them because they google recipes instead. I do have a few favorites that I kept. Have a good week and don't eat any of those shrooms!