We Did Something Very Amazing!! 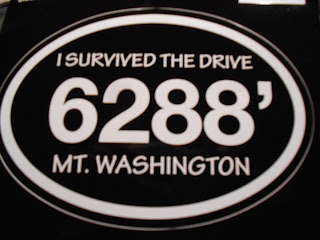 I am very afraid of heights. 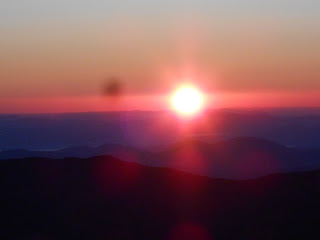 Husband and I got up at 2 Am, to drive about 2 hours ,to be able to drive up to the highest peak in    the north east, 8 miles straight up! MT WASHINGTON! To see the sun rise. They open the gates early
3 times a year and since it was suppose to be clear and beautiful. And since we
have never been to the top we went. 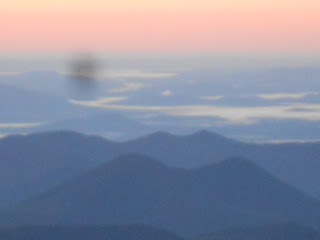 To be able to see this. We could see several states and into Canada.
The white you see is not water it is clouds we were above them. 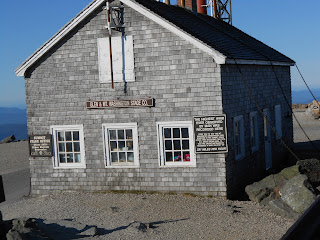 This is also the place for the highest winds ever recorded on earth. Over 200mph Which may have been broken a year or so ago. This is one of the original buildings that was built up there. as you can see it is chained to the rocks to keep the roof on during the high winds of winter.
They now have newer buildings and run experiments among other things. 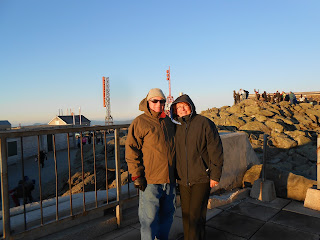 When we got to the top it was about 30 and the winds were blowing. We were
dressed for it. 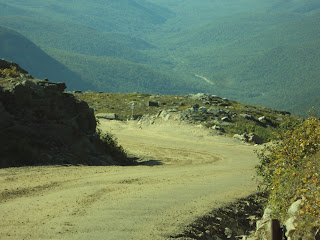 The worst part going down!!!!!! This is a hair pin curve and you can see no
guard rails. The worst part was this part of the road was under construction and when you met
another car you had to get way over in lose dirt. I chose not to look and husband was
trying not to saying anything but when we got to the bottom he said that part scared him.
When you go down you have to pull over in lots of places to let your brakes cool down.
It was an amazing experience and I am so glad I got the courage to go.
***
After this we joined Miss B and our daughter for an afternoon of Storyland.
needless to say we were super tired when we got home and took naps.
Have a great week everyone!
Posted by acorn hollow at 9:01 PM

That is amazing to go there for the sunrise. We have driven up once and that was the last time, scared me to death, lol. But it was beautiful from the top. I found going down easier than up.

That is amazing. Breathtaking views. It was well worth the early start, I would say. But I'm not sure about the drive back down :)

Big Congrats !! That is quite an accomplishment !That last mountain we went up was little Mount Greylock.
But have been to Pikes Peak :)

What a cool thing to do!!! I bet the views were so much better than a picture can show.
Hugs :)
Lauren

That's awesome. And good for you for going. I have a terrible fear of heights as well and that road reminded me of the 6 miles up the back road into Yosemite. Oh my was I scared. It took 30 minutes. It was better going down as we were on the inside.

*****i'm with you on the heights...and like flying, the fun
part is going down the runway to take off...not so when coming down!!! bridges are enough for me...the mountains are beautiful...but i will stay at the ocean! tom

I'm glad you did this!!! The worst part IS coming down!! Suppose to put your car in lowest gear and try not to brake very often. The altitude sometimes gets to me, that high up, and I get dizzy, but---well worth the adventure!

Oh just the thought of it makes be cringe! I used to hate going across the Kancamagus. lol I am awful with those things. I have lots of anxiety. good for you to be able to say that you did it. I will bet Story Land was a fun time. Blessings~Sara

Absolutely breathtakingly fabulous! I've been up to Mt. Washington and LOVED it! I"m not too good with heights either... but that beautiful view completely distracted me from knowing just how high up I was! :-)

Wow, that is an amazing adventure, you are a brave girl. So beautiful the sunrise from way up there. Blessings Francine.

Good grief but you're one brave soul. My heart would have been pounding during the ride down for sure.

From Beyond My Kitchen Window said...

Isn't the peak of Mt. Washington beautiful. I have been to the summit three times. The first two I wasn't nervous driving up at all. The last time we had all our kids in the car and I was in panic mode the whole time. So worth it though. Beautiful photos.

WOW what an accomplishment!!! I don't know that I could have done it,would have been scared to death. Good For You!!!!

What an early morning trip! I do believe this is the mountain that one of our daughters actually climbed during the winter a couple of times! She made it to the top!

What an amazing trip and I'm sure the view was worth it! The drive back down from the heights is always scary to me too!

Can you believe they used to do car races up that road?!
Quite an accomplishment doing that if you are afraid of heights!!! I'm NOT, and I had a DIFFICULT time being a passenger on the way up and not seeing any land outside my side of the car!

Wow, congratulations for the courage to do this.
You had every right to be scared. That part would be scary. Not a place for brake failure.
Thanks for sharing your brave trip up the mount.
Big hugs,
JB

You are totally my hero..I'm very afraid of heights but you've proven that when you put your fears aside, great things can happen! Plus the shots are beautiful!

Wow Cathy what a fun thing to do! Im sure the scenery was worth the drive up and down. I am not good with heights at all.. And have missed out on a few things because of it.. Beautiful! When we were stationed in Japan, Mark climbed Mt Fuji with guys from his work. Lots of gorgeous pictures and a well used walking stick! Enjoy your day!

My heart was with you on the way down. You are so brave and wasn't it worth it?
Chains to hold the roof on...all I can say is they must have some wicked winds there.
Balisha

That is so amazing! What views! I have to say, that the older I get, the more I do not like heights. I used to be fine with them. Now I usually just close my eyes at the scary parts.

Wow! That is amazing! And so cold, even in August! I would have had a hard time driving down. Enjoy the holiday weekend. Sarah

I'm in AWE!
When we overcome our fears we can be blessed in a huge way.
That is some high winds, for sure.

Amazing! I'm happy to hear that you did this, and thank you for sharing it with us!
Erica :)

What a great post! Since we are in Virginia there's probably not a big chance we would ever get to do that. Thanks for the pictures and the info and congratulations, too!

Oh, what an amazing post! I didn't realize that they open early for sunrise spotters! How glorious! I want to do this, and will be checking their website to see when I can get a chance. I've been up there once, with my in-laws. We took the tour van as our minivan wasn't rated to handle the 7 of us. What an interesting ride! I sat in the back seat of the van over the wheel on the passenger side, and most of the way I could look down and not see the road, 'cause we were so near the edge. The guide told us that nearly everyday they have to drive someone's car down for them because they succumb to fear (or reason). Thanks for the pics!

I just went to website, and I'll have to wait for next summer, but in the meantime, check out the pictures on this website: http://mtwashingtonautoroad.com/drive-yourself/sunrise-drives/
I like the one with the young lady leaning into the wind at the 5,000 foot elevation marker.

Okay....I have a confession to make here. I am terrified of driving along cliffs with no guardrail. That and bridges too. I get sweaty palms and I can feel my heart rate go up. You are a brave lady! I think I will just walk up. LOL