The Rantings Of An Old Woman 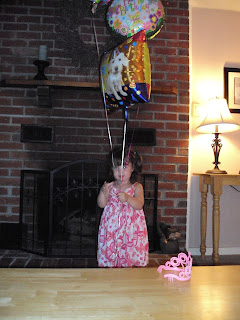 Friday was my daughter's anniversary so we ran to her house
after I got out of work to sit with Miss B so they could go out.
her husband surprised her with a trip to Vegas they left Sunday.
Miss B helped me celebrate my birthday
It was the best birthday present ever to be with her. 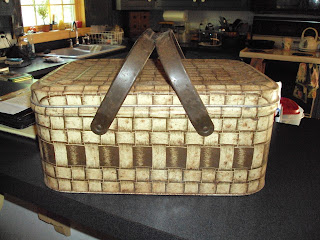 Sunday morning husband left me this sweet metal box, I collect them.
He is so thoughtful inside was a new point and shoot camera. Now let me tell you
about the camera issue I have had. I bought myself a new camera in Feb of this year
and by april it was missing. I felt horrible about it, believe me it was a point and shoot
no huge money but still 2 months and it is gone. When husband said "I am going to buy you a
new camera I flatly said no I had the old one that works just fine. The guilt factor about the
missing camera when I thought about it was so over whelming. Husband said many times "Move on  it's gone" So he thought he would move me on but when I saw the camera all I could think about
was him spending money for a camera to replace my carelessness. I tried to act happy but he could
see through me and from there it was one hurt feeling after another I felt like the marie on Raymond always so b-t-c-y. So at the end of the day I kept hearing in my head it's in the chair. I took the seat cushion off no camera ( I had done this before looking for it)I poked my hand in the back and side no camera and THEN I ran my hand on the other side and out pops the camera! All that and I had been sitting on it for months! Then to end the day Husband took me out to a late lunch by the lake we were sitting on the deck in sun enjoying the day a clap of thunder the wind started blowing and some rain showers. that was the end of the day so folks that is no way to have a birthday. 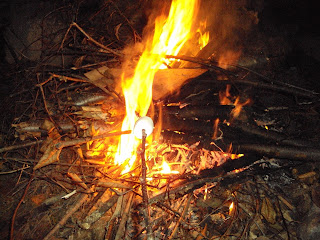 And because we went from 90-100s to 60s we had a camp fire it definitely feels like fall.
***
Thanks for the birthday wishes I am just glad it is over.

That is so funny, did you take back the new one?
It has cooled down here too but I am enjoying the cool breezes. The bad thing is the pool is freezing and i need to get moving again. I am not into birthdays myself, seems like it is more trouble for me to please others who spend too much too;)

Oh that sounds so like me with the camera. Not that I've lost one just the attitude about things and sometimes it comes off hurtful to the person trying to help when really that's not how it's ment. Lucky they know how we really are and deal with us anyway..smile.. At least you had some grandbaby time so it was still a wonderful Birthday! Amy

That's quite a story!!! Kind of funny if you're on the reading end of it!! Ad it could so easily be me!! Belated happy birthday ~ enjoy today!!

HAPPY BIRTHDAY Cathy, sorry it rained but at least you got a bonfire.
How sweet that you spent your birthday with Miss B. That was a beautiful gift.

I'm glad that you found your old camera. I have a Saint that I pray to, to find lost objects. St Antoine De Padou is the patron saint of lost objects and he is very good to lead me where the lost object is when I pray to him. It's amazing.

You husband is a sweetheart to buy you a new camera. Now he can join you on this wonderful hobby.

Hugs for a good week.
JB

These are late birthday wishes. I am so glad you found that missing camera! Also, happy anniversary to your daughter! It was special that you were able to take care of Miss B!

Happy belated birthday! Please send some cooler weather ...fast...I'll even welcome the thunder is it brings some cooler temps with it!
Robyn

Perhaps the lightning bolt was notice to you to accept the gifts graciously or you might not get any more? LOL.

Happy Birthday! So glad you found the old one. What are you going to do with the new one? Buy more tin picnic baskets? LOL I have that same basket and I adore it. I have four stacked up and use it as a table plus the extra storage.

Happy belated birthday. I would say that your sweet husband is a keeper. Not only does he sound thoughtful but he pays attention! I'm giggling about the camera. Oh well,now you have a spare:)

Happy birthday Cathy! I wonder what the Lord was trying to teach you with the missing camera? I think you have a rare find...a really wonderful hubby!

Belated Happy Birthday Cathy!!!Glad you found your camera, like your new tin basket, the Mr. he is a keepa!! I am so enjoying this fall like weather, a camp fire sounds perfect...Hugs, Julie.

Oh honey I am sorry about your day but glad you ended up finding your camera but how strange it is how you found it.
I think most of us can so relate to your feelings.
Glad you were able to spend it with Miss B I know how happy our babies make us. She is really growing up fast.
Happy Belated Birthday and many many more.
Thanks for the get well wishes. I know Clint appreciates them as much as I do.
He is a sweetheart and I hate he had to go through this.
Love
Maggie

Oh my, I think you should relive your birthday, pick another day celebrate.

Hope you had a great birthday Cathy!! I'm glad you found your camera I hate not being able to find something because I know right where It should be..