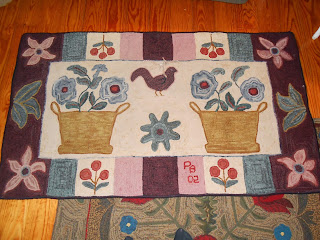 This is my very close friend's rug. One of the ones she did early
on when we were learning to hook. It is a large rug 38x57. 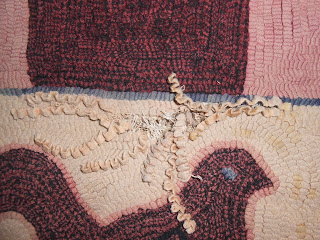 Her cleaning lady was airing it out. and put her hand through it!
We both believe in putting rugs on the floor they are to be used not
rolled up and put away never to be used. She decided to put it in her bathroom.
and it rotted in that spot! We both were heart sick. 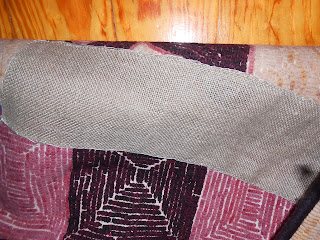 So I ran over and sewed a linen patch way around the broken part.
I was worried we would find more rot but it seems to be right in that spot.
I am going to work on it this weekend and try to get it fixed for her.
She is unable to do it herself right now as she is having a problem with her hands.
I will show a picture when I have it done.
The moral of the story is use your rugs just not in the bathroom!

Oh Cathy, this is what they must mean by "what a rotten shame" I don't blame you both for being heart sick over this but I have every confidence in you to get it fixed as good as new.

You are a kind soul to do this for your friend. That rug must mean so much to her. Good luck with fixing it. I can't wait to see a picture when you are done fixing it.

Aww, that's a shame. It's a beautiful piece. I'm sure you will have it as good as new soon.

What a beautiful rug! I hope you are able to correct the problem!

Oh, I hope it's repairable, so many hours of work into such a beautiful rug.

Oh, my gosh. I never would think that. If I had that rug...it would be up off the floor. Of course, I can't make rugs that beautiful...When you have several that you have made, I suppose you do want to use them.
It's nice that you can help her out.
Balisha

Good advice!! I have one is the guest bath ~ I think it's good there ~ no showering ~ just hand-washing!!

That's good to know. I know it will still be beautiful though and can be enjoyed. What a work of art!

That is going to be a complicated repair!!! I know you can do it!

I have lost a few rugs to rot and I use linen. I never put them in the bathroom or kitchen, but the dog was always drooling all over the ones he used, so they are still on the floor but won't last much longer. Not worth the effort to redo them since my cats also like to pull the loops out. I find cheap tighly woven rugs are good scratching posts, lol.

Ahhhh, that's a beautiful rug Cathy for her first, wow!!!!! Your a great friend, Francine.

Good heavens, I'm surprised. I'd have expected that from burlap but linen. But guess the constant moisture was the enemy. Thanks for the lesson.

Cathy,
Well, I finally found the reason I don't have a cleaning lady :)
All kidding aside, what a shame. You and your friends sure do like to hook B-I-G rugs. Good luck with the repair.
Hugs :)
Lauren

Guess I should explain myself. I can't make rugs like this...so if I were to be given one...I probably would keep it off the floor, so it would last longer.....thinking that I might never receive another one.

Good luck with the repair. What a good friend you are!

It's a beautiful rug, I'm surprised that it had a problem in the bathroom. I know your repair will be perfect!