Is This The Airport?

I have been so lazy lately not much of anything except reading. Last book read Carrie Fisher's
Wishful Drinking, now I am at the end of a Kristin Hannah book Waiting For The Moon.
Next in line is Water For Elephants.
I have been thinking about ways to use up this large basket of worms. I think I just might have another give away what do you think if I separated some of the colors out? 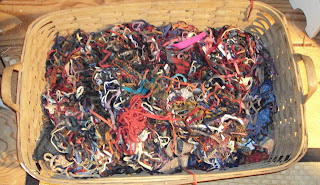 I have been working on this chair pad for a very long time. Again I am using up some of my worms. 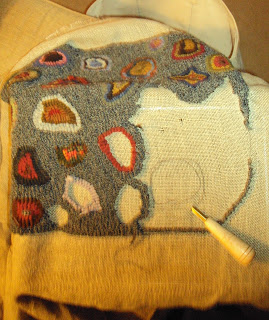 We met David's brother and his wife for the brunch last Sunday. It was so wonderful, a beautiful place, amazing view, and the best food I have had in awhile. After brunch we strolled around the stores in the area. I saw this sign I know, I know it is not nice but I was laughing so hard. I took a picture but it is a bit shakey.

I have a lot of new followers so to catch you up a bit my husband had a bone marrow transplant in Nov 2011. Today we went to Boston to get the results of recent bone marrow biopsy and some other tests.
The Dr had a big grin on his face and said you are doing so much better than we ever thought at this point.
Yahoo! So on the way home we celebrated with lunch at the olive garden (soup and salad yummm)
When we got home we went on missingmoney.com and found that David had 150.00 dollars coming to him!
I would say a pretty good day! So I guess this isn't the airport.
It is fun being in the same decade with you.
Franklin Delano Roosevelt in a letter to Churchill 1942

I love the idiot sign, that's a good one.
I'm so glad that David is getting some great results in his recovery. Always so good to hear.

Getting money back is always a good thing. That big basket of worm is calling for a nice hit or miss rug. I hope that you have a nice week. The weather is abnormally warm here and the snow is melting.
Hugs, JB

I want that sign for work..stat! Congrats on the good health news and the lovely lunch...have a great week! P.S..I didn't know little thread bits were called "worms". I learn something new every day!

What great news!!! And money to boot!!! A good day at Acorn Hollow!!

Oh that is such good news from David's doctor!! Yippee!

That's a lot of worms. I didn't even delve into the worm hole for my last rug with all that hit or miss. I wanted to use colors from the flowers...so I cut more strips. Now I have even more worms! Sounds like a worm challenge is in order! LOL
Hugs,
Courtney

Great news about David!!! I love the sign... I think we've all had days where we stand with a puzzled look on our face and say "Did I really see/hear that person do/say that?!?!?" lol!

Congratulations to David on good report card. And the windfall of money is great as well.

I haven't been able to do a new post on my blog in days. I've written to Blogger and told them of my problem but it still hasn't been resolved.

I would love to have that sign on my office door - LOL
So glad Dave is making the Doctor's smile. I bet it put a big smile on your face too.

Oh that is such good news! What a road you have been on and it's getting so much better! Your basket of worms remind me of mine.Have a good week, hugs Cheri

About the sign, the 1st time I heard this was from one of my former co-workers in Boston! Only instead of "Idiot" he used the "A" word! LOL!!! Then we started picking out who the "pilots, flight attendants, mechanics" etc. were!!!

Hope you bought a lottery ticket!

So happy to hear David's good news, a very good day in deed. Worms, I am of the opinion that you can never have too many. Hugs, Julie.